It's been a huge day here at COP25. This morning, there was a session with Greta, which culminated in a surprise occupation of the stage by the Fridays For Futures young people. It was peaceful and inspiring as they sang and chanted. Security descended quickly, and tried in vein to convince them to just leave straight away. They then tried to convince the audience to leave but that didn't work either. 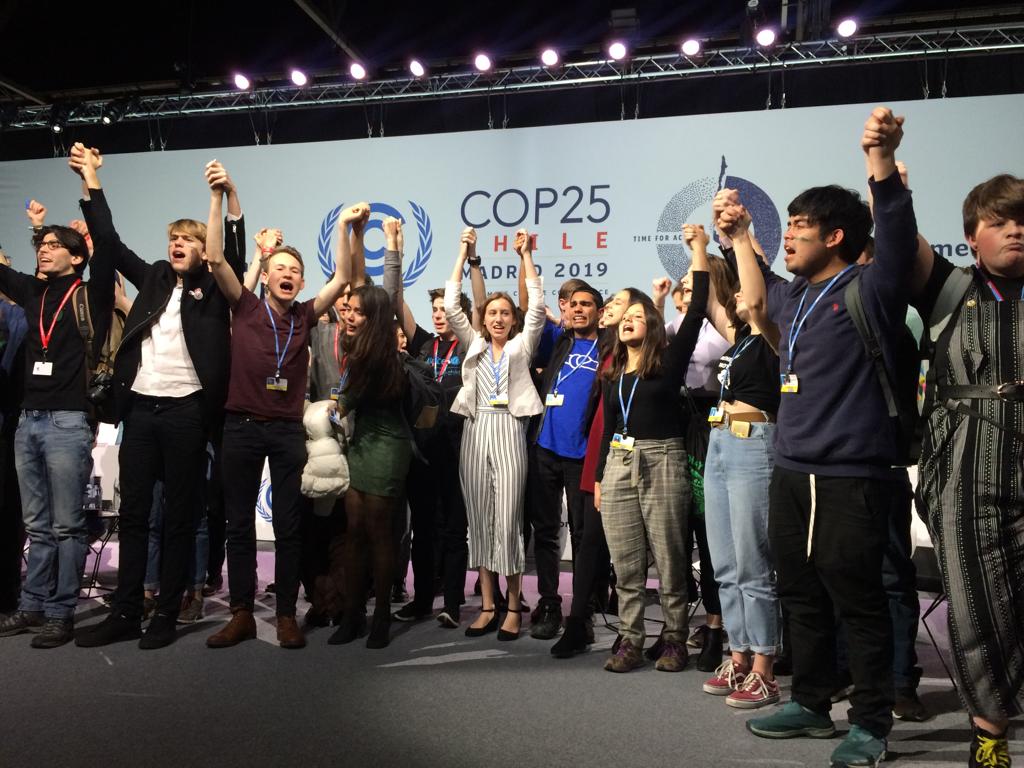 Pretty much everyone in the auditorium of probably over 1,000 people stayed to watch. But when it came time for threats of access passes being taken away, the young people quickly left. No problem, no harm done. The worst that happened was the next session running a little late. But protests aren't supposed to happen at COP, and it seems this was the first time one had happened inside the venue.
Things stepped up a notch or two in the early afternoon, when another protest, by Fridays for Future and the Climate Action Network International was staged as people were gathering to go into another session. A media scrum formed quickly, and again, security descended. Again, it was a peaceful protest. But this time, the response was different. Security slowly moved the group towards a side exit, and outside. A line of guards then formed across the door way, leaving about 300 people stranded outside in the cold. A metal door went down leaving them with no exit. Many did not have their coats or bags, and they were left outside for hours. Stories have emerged of people being left sore after the jostling. A woman being inappropriately touched - which is sexual assault. An Indigenous woman who was separated from her baby not being allowed back inside to breastfeed. The group were taken to the front of the venue, and had their access badges taken. Access within the venue was restricted for a period of time, and anyone with an 'observer' badge (civil society) was not allowed to enter the venue. A call went out among health colleagues for urgent mental health support for those caught up in it.


Protests are not allowed within COP, and they were breaking the rules. Fair enough. Make them leave if you must, and remove their access passes if you really must. But human rights should not be violated in the process. There was no attempt made to let the protest run its course. Instead, the response was heavy handed from the outset. I have personally experienced the aggressive attitude of certain security members here at COP, over the tiniest issue. It's been unnecessary.


The protesters have been trying to call out the lack of action here at COP, and they are right to do so. Negotiations are not progressing on the important issues like financing for the loss and damage sustained in developing countries. No real progress on increasing ambition of the emissions reductions in line with the changes in the science since Paris, other than from the EU who have provided an important leadership on this, increasing their commitment from 40% to 55% by 2030 in their Green New Deal.


There have been lots of references made to the air pollution situation in Sydney from many here at COP, and I have personally invited Minister Angus Taylor to see the WHO's air pollution pods which are here. The protests which happened in Sydney today are an indication of what is to come. I fear the trauma experienced by some of these protesters here at COP today is also an indication of what is to come.