A summary appears below. Here is the full report. 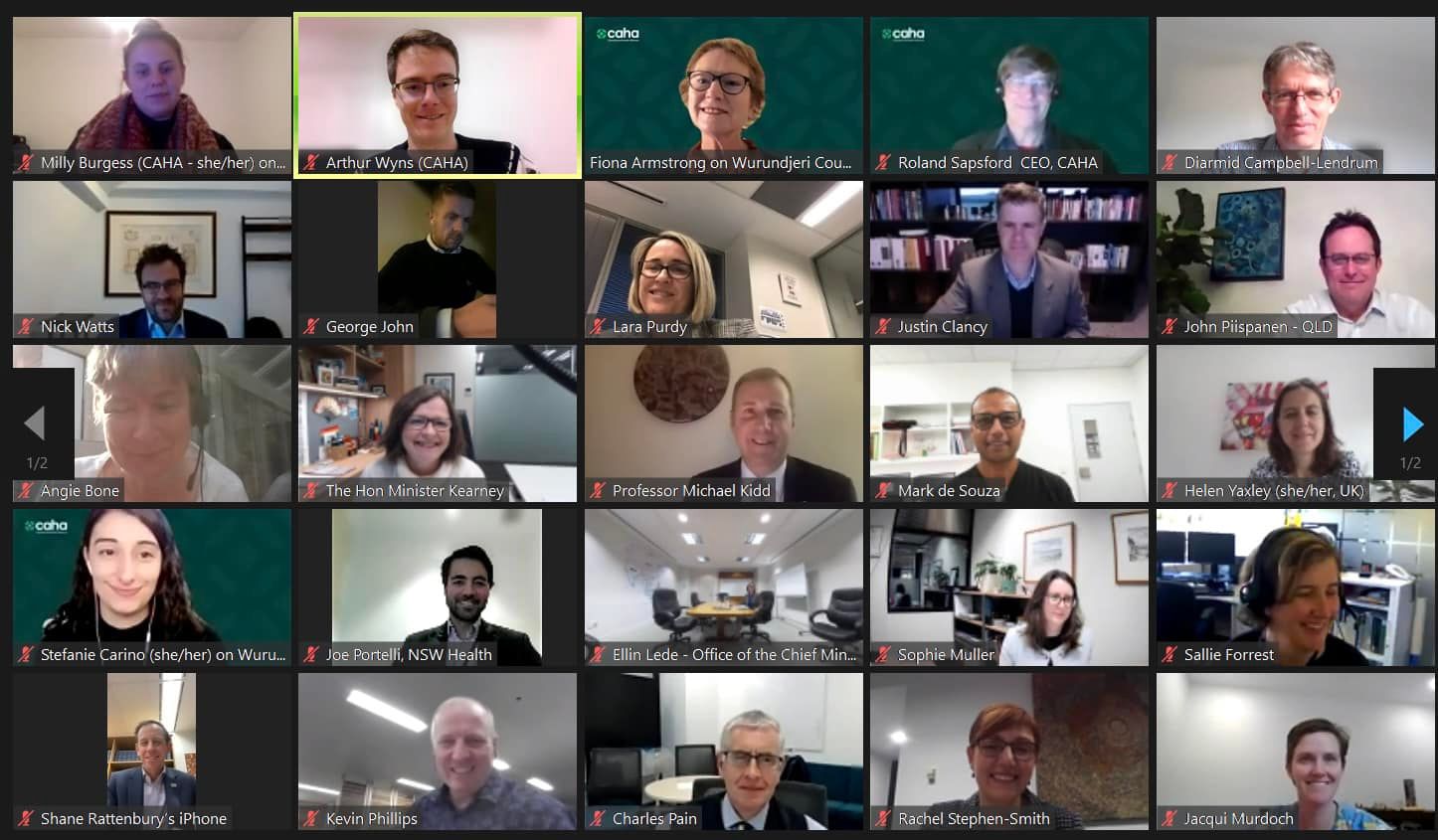 The big picture: Commitment to climate-health action and sustainable healthcare around the world

The global healthcare sector emits 4.4% of global greenhouse gas emissions.  If it were a country, it would be the world's fifth largest emitter. In Australia, the healthcare sector accounts for a whopping 7% of national emissions. Climate health impacts are accelerating, amid stalled progress, despite the increasing evidence of health benefits associated with climate action.

Good news: global commitments to climate adaptation and resilience and low-carbon, sustainable healthcare have scaled up significantly in the last year!

Launched at COP26, the global climate and health program now known as ATACH (Alliance for Transformative Action on Climate Change and Health) has been a global success. Through ATACH, almost 60 countries have committed to climate adaptation and resilience and low carbon sustainable health systems. Nineteen of these have net zero health care targets.

CAHA and WHO hosted the second annual Roundtable on Health Leadership for Climate Action on 29 June 2022. The first event, held in September 2021, occurred ahead of COP26, and was an opportunity for the Australian government to hear about, and consider participating in the COP26 Health Program. At Glasgow in December 2021, 50 nations pledged to join the program and in so doing, committed to action on climate adaptation and resilience and low carbon and sustainable healthcare.

In 2021, seven of the eight state and territory governments were represented. The Commonwealth did not attend.

In June 2022, every state and territory government attended, and they were joined by the Assistant Minister for Health and Aged Care, the Hon Ged Kearney MP.

The ATACH program calls for signatories to commit to six actions:

What’s happening around the states and territories?

States and territories play a crucial role in climate resilience and greening the health sector. The Roundtable heard from representatives from every state and territory health department.

"When it comes to preparing the health sector for climate change, SA still has a lot of work to do,” said SA Health Minister Chris Picton. He noted that climate change is a public health priority, and that SA needs to develop health-specific climate plans and to align the health system with SA's climate targets.

ACT Health Minister, Rachel Stephen-Smith MLA confirmed the ACT health system will reach zero emissions by 2040. The first step has been to source 100% of the health system’s electricity from renewables. As yet, scope 3 emissions for healthcare are an untapped opportunity for climate action.

The ACT Health Director is a member of Global Green and Healthy Hospitals network, and is currently considering joining ATACH. Minister Stephen-Smith emphasised that federal leadership will benefit all health systems. She welcomed the participation of the new federal government in this dialogue.

Victoria aims to embed its climate targets into its healthcare system, said Dr Angie Bone, Deputy Chief Health Officer. The Victorian healthcare sector has had an environmental sustainability strategy for many years. At its peak, the health sector generates around 13 megawatts of solar energy across 158 health facilities. Victorian public hospitals will be powered by 100% renewable energy by 2025.

In February 2022, Victoria published its Health and Human Services Adaptation Action Plan. The Department of Health is currently embedding climate resilience and sustainability across all its portfolios. The Department is also considering the establishment of a Sustainable Development Unit (SDU), as exists in WA and the UK.

Queensland has had a Health and Climate Adaptation Plan since 2018, and has now developed a Climate Risk Strategy for the health sector, said John Piispanen, Executive Director of the Health Protection Branch, Queensland Health. The strategy requires hospitals and health services to have Climate Risk Action Plans.

Within Queensland Health, the Office of Hospital Sustainability will execute the department's 10-year emissions reduction plan. With a $30 million budget, the Office will fund emission-reducing initiatives in healthcare facilities.

WA Health has recently established a SDU to coordinate a system-wide response to climate change.  In its first stage, the SDU is analysing the health system’s carbon footprint. Various sustainability projects are underway, including to remove desflurane (an anaesthetic gas with a high global warming potential), introduce zero emission vehicles, scale up solar panels on hospitals, and more.

In its second stage, the SDU will develop a systemic and strategic framework to ensure WA has a climate-resilient and sustainable healthcare system. In 2023, WA plans to develop a health adaptation plan, and a communications strategy about the links between climate change and health.

Tasmanian Department of Health's Public Health Services Chief Executive, Sophie Muller said Tasmania has abundant opportunities to progress climate-health outcomes. Tasmania’s five-year plan for preventative health has listed climate change as a priority. Tasmania is developing a sustainable infrastructure strategy for its health system. The Department has a range of sustainability initiatives available to hospitals. Ms Muller said there is now an opportunity to apply these initiatives across the hospital system.

The NT has an emissions reduction target of net zero by 2050. It can now translate this to a health system target, said Dr Charles Pain, NT Chief Health Officer. There is significant investment in solar energy taking place in the NT. The government has adopted a 50% renewable energy by 2030 target. The NT is interested in learning from colleagues about healthcare sustainability, added Dr Pain.

How do Australian governments measure up?

CAHA has produced a climate and health policy map, which provides an overview of current policy commitments on climate and health across Australian jurisdictions, and how they compare to the six commitments of the Alliance for Transformative Action on Climate Change ATACH, formerly known as the COP26 Health Programme. See Appendix 1 of the Roundtable report.

The health sector is ready and willing to engage

Fiona Armstrong from Climate and Health Alliance emphasised to the Roundtable participants that there is overwhelming support from the health community across Australia for the health sector to lead on climate action and sustainable healthcare, and a willingness to work with governments to implement an ambitious agenda on climate change and health.

Strong support exists across the health community for initiatives such as:

Many participants of the June 29 roundtable expressed a keen interest to continue the conversation, and indicated they are willing to build stronger links across jurisdictions in order to identify and implement climate priorities for the Australian health system.