Framework for a National Strategy on Climate, Health and Well-being for Australia

In a world first initiative, a coalition of leading health experts and organisations, along with federal parliamentarians, has launched a Framework for a National Strategy on Climate, Health and Well-being for Australia.

The Framework has been developed following a year-long national consultation to identify stakeholders’ priorities and concerns regarding the health impacts of climate change.

This Framework for a National Strategy on Climate, Health and Well-being for Australia provides a roadmap to support the Commonwealth Government in taking a leadership role in protecting the health and well-being of Australian communities from climate change, and in fulfilling its international obligations under the Paris Agreement.

The Framework does not only imply actions and strategies for the health portfolio and sector; in recognition of the systemic and complex nature of climate change, and the fact that the determinants of health and well-being lie largely outside the health sector, it prescribes policy directions for a range of portfolios, including energy, climate, environment, transport, and infrastructure. It includes actions for federal, state, and local government, for research institutions, and for the health sector itself.

In the Foreword to the Framework, Nobel Laureate for Medicine, Professor Peter Doherty writes:

"Without urgent action on climate change, the conditions that underpin the health and well-being of the human population will be greatly diminished in coming decades, and may only be available to a small number of people living in a few parts of the planet by the end of this century."

He goes on to urge government to act: "The adoption and implementation of this Framework provides the opportunity for the Australian Government to become world leaders in health and climate change policy. Together with effective mitigation policies, Australia can make a contribution to the global effort of tackling global warming, while reaping immediate and local benefits for its citizens in the near term." 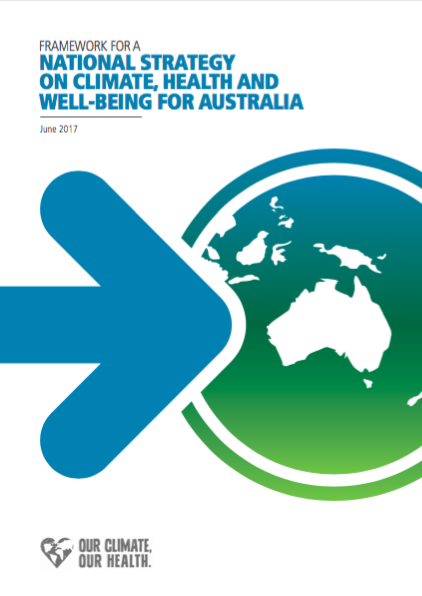