Election 2016: Where is the leadership to protect Australians from the worsening health impacts of climate change?

Both leaders of the Liberal and Labor parties have spoken about health, but neither has discussed the potentially “catastrophic” risks of climate change to health, nor the great potential benefits to health from action on climate change.

Nor have any journalists have asked either leader about their plans to protect the health of Australians from climate change.

It seems that not only politicians – particularly the current government – but also the media in Australia are failing to recognise the seriousness of climate change and its impacts on health, and the need for urgent action.

The Climate and Health Alliance has surveyed the main political parties: Liberal, National, Australian Labor and The Greens on key issues relevant to climate change and health in the lead-up to the July 2016 election, and analysed publicly available policies and made an assessment of their performance in the Scorecard below. 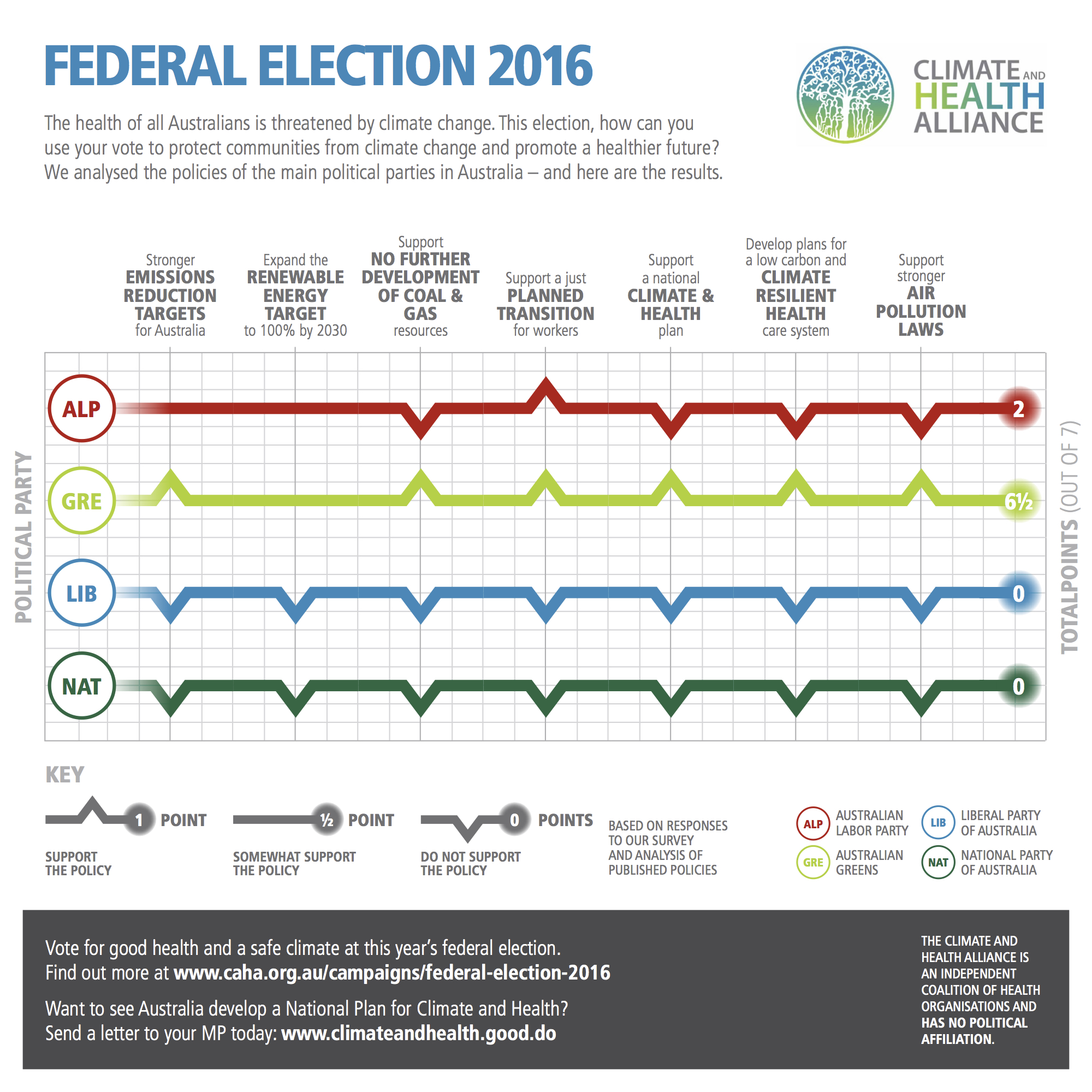 The most recent comprehensive assessment of the scientific evidence on climate change and health, the 2015 Lancet Commission on Health and Climate Change, said that the health impacts of climate change already being felt, and without urgent action, they will become “potentially catastrophic for human health”.

The Commission also states that action on climate change could be “the greatest global health opportunity” of this century, as countries shift towards:

All of these measures have the potential to improve people’s health as well as reducing carbon emissions and climate change.

Calls for action on climate change to protect and promote health are supported in Australia by the Australian Medical Association (AMA), the Royal Australasian College of Physicians (RACP), and many other major public health bodies.

The issues of concern: CAHA’s position

The position of the Climate and Health Alliance on each of the issues surveyed, and the policy response it seeks, is outlined below:

What it means: Australia’s most recently announced emissions reductions targets of a cut by 26%-28% on 2005 levels by 2030 is vastly inadequate to protect Australians from climate change. Such a small target is not in line with preventing the devastating effects of 2 degrees of warming, and does not represent a fair contribution to global efforts to preventing climate change. Closely aligned with, but building on, the recommendations of the Climate Change Authority, and consistent with the short term targets of The Climate Institute, we recommend:

Why it’s important: Strong emissions reduction targets will help limit massive adverse impacts on human health, both in Australia and globally. Averting further risks to health of the Australian and global population must be a key driver for implementing economy wide emissions reductions as quickly as possible.

How to find out more: The Climate Change Authority’s recommendations can be found here: http://www.climatechangeauthority.gov.au/files/files/Target-Progress-Review/Targets%20and%20Progress%20Review%20Final%20Report_Summary.pdf

What it means: Current estimates suggest around $12 billion a year is provided each year to subsidise fossil fuels. Over a six-year period, state governments in Australia spent $17.6 billion supporting the mineral and fossil fuel industries. This is extremely perverse policy, given the harm associated with fossil fuels. All subsidies to fossil fuels should cease and the funds applied to boost the availability and affordability of clean, renewable resources for energy and transport.

Why it’s important: Estimates from the International Monetary Fund suggest  eliminating subsidies for fossil fuels would cut global carbon emissions by 20 per cent; slash the number of premature deaths from outdoor air pollution by 55 per cent (about 1.6 million lives a year) and deliver projected economic gains of around $2.9 trillion in 2015; money which could be redirected towards health promotion and community development initiatives.

How to find out more: The International Monetary Fund report on fossil fuel subsidies can be found here http://www.imf.org/external/pubs/ft/wp/2015/wp15105.pdf

What it means: In its current form, the Renewable Energy Target alone will not deliver sufficient emissions reductions to achieve the targets outlined above. In addition to the forced closure of coal-fired power stations, complementary measures to encourage both small and large scale renewable energy  are required, such as loan guarantees (where there is market failure), feed in tariffs (to provide investment certainty) should be developed, and investments made in research and development to quickly scale up emerging technologies.

Why it’s important: Australia has the technological capacity to reach 100% by 2030. Any delays in decarbonising our daily living, our transport, our agriculture, our industry other areas of the economy extend the accumulation of risk to our health.

How to find out more: The Institute for Sustainable Futures (ISF) at the University of Technology Sydney has outlined how Australia could get to 100% renewable energy by 2030.

Support no further development of coal and gas resources and a just, planned transition for workers

What it means: No further coal mining or gas extraction licences should be issued, and a plan to cease exports of these resources developed . State and federal governments must work with affected regional communities and alternative industries to develop plans to help communities currently involved in coal mining and gas extraction to transition away from those industries, towards industries that deliver long term environmental, economic, and social benefits and sustainability.

Why it’s important: A social justice framework requires that the transition away from fossil fuels should involve equitable sharing of responsibilities and fair distribution of the costs: those who have contributed less to the problem should not bear the burden of the transition costs. In order to avoid burdening workers and vulnerable communities with the human cost of shifts in industry and the economy, a plan for a just transition should include:

How to find out more: The 2015 ACTU Policy Congress resolution outlines a vision for  just transition in Australia http://www.actu.org.au/our-work/actu-congress/actu-congress-2015/congress-policy-resolutions/a-fair-go-for-all-policies/environment-and-climate-change

What it means:  The development of national strategy to outline Australia’s response to the health risks from climate change and the carbon intensive national economy would include:

Why it’s important: The lack of priority afforded to human health in national mitigation and adaptation strategies in Australia has ensured that the Australian health sector and community are underprepared for the health risks associated with climate change.

How to find out more: Keep in touch with the Climate and Health Alliance campaign for a National Strategy on Climate, Health and Wellbeing here: http://caha.org.au/campaigns/national-strategy-climate-health-wellbeing/

What it means: Delivery of healthcare presents challenges related to waste management, use of chemicals, provision of food and reliance on energy-intense technologies. THese can cumulatively have a negative impact on the health of humans and the environment. The good news is that the healthcare sector can play a leading role in solving these problems. Enhancements in building energy efficiency, staff behaviour change programmes and increased use of energy from renewable sources could dramatically reduce the footprint of the healthcare system.  It is imperative that we have the research capacity to envisage  future demand for health services, likely physical impacts on facilities and their ability to cope with these, strategies to improve coping capacity, associated costs, as well as integrated disaster plans to ensure health services can continue to function during extreme weather events.

Why it’s important:   The scale of the healthcare sector translates to significant buying power, and its community-driven interest in preventing disease means the health sector can be an important player in shifting the entire economy toward sustainable, safer products and practices. Further,  as the climate changes, health services are placed under increasing pressure during extreme events; supply chains of pharmaceutical and medical supplied impacted; and health professionals and emergency professionals themselves impacted personally, limiting their ability to respond.

How to find out more: The UK’s National Health Service provides a system-wide example of how the health sector can reduce its greenhouse gas emissions and transition towards a low-carbon and sustainable future. http://www.sduhealth.org.uk/policy-strategy/reporting/sustainable-development-in-health-and-care-report-2016.aspx

What it means: Current regulations for air quality in Australia are inadequate to protect health and well-being. There are strong economic arguments for improving air quality as evidenced by the cost: benefit ratio associated with improving air quality under the USA Clear Air Act. Australian state and territory regulations need to be expanded to ensure the impacts on health and wellbeing are being considered in planning and development decisions. In addition improved monitoring of compliance with existing regulations is needed.

How to find out more:

The Clean Air Action Network is a group of organisations working together to tackle air pollution as an environmental justice issue and putting pressure on governments – both state and federal – to take real action. Their exploration of the issue can be found here: http://www.cleanairaction.net.au/health