CAHA at the Climate and Healthcare Conference, Paris, 4th December 2015

Fiona Armstrong from the Climate and Health Alliance was a speaker at the Climate and Healthcare Conference, held during COP21, at Georges Pompidou Hospital, Paris, on 4 December 2015. The Conference was organised and hosted by Health Care Without Harm, the French Hospital Federation (FHF) and the French Federation of Private Non-profit Hospitals (FEHAP). Supporting Organization: Paris Hospital Associtaion (APHP). 15:50 “ 17:00 Panel 4: Governance and financing of the energy transition Moderator: Didier BOURDON, Assistance Publique Hopitaux de Paris (AP-HP), France 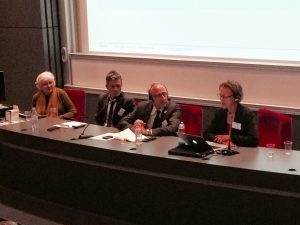 A transcript of Ms Armstrong's speech appears below: "Thank-you for the opportunity to talk on this topic.

The governance and financing of the energy transition are both huge topics, and in some ways are quite different in terms of the approaches that are being undertaken to effect the transition, with very different actors in play and different constituencies being targeted.

There are obvious shortcomings with both governance and financing, and I will speak briefly about our association, that is, the Climate and Health Alliance's, with both in Australia.

This is more about governance and financing of energy more broadly, not just in the health sector.

In Australia, our electricity production is primarily from coal, and the coal industry is both politically powerful and like the industry internationally, delusional about the future of their industry and their culpability when it come to global warming.

The coal industry is seeking to expand, refusing to acknowledge that achieving anything remotely like a safe climate (ie limiting warming to 1.5 or two degrees) is incompatible with a future coal industry.

Our governments in Australia are first rate cheerleaders for the fossil fuel industry, providing (according to a new report from Oil Change International) $5 billion in subsidies to the fossil fuel industry each year (some other reports put it at double this figure) (and like many high emitting nations, this is over 100 times more in subsidies to fossil fuel producers each year than $ to the Green Climate Fund) while enjoying the industry's donations to election campaigns, and state governments are seemingly addicted to the royalties paid by mining companies which they then use, somewhat ironically, to provide healthcare, education etcetera.

We have been working with healthcare stakeholders in Australia to effect a discourse about the health implications of energy policy and encourage health organisations and advocates to see this as core business for health in the context of a ˜health-in-all-policies' approach.

We have worked to highlight the economic costs associated health damages from continued production and combustion of coal and oil and gas for local communities as well as for the global community from climate change.

One such effort is a recent study on coal and health in the Hunter Valley, in a report we called Lessons from One Valley for the World.

The Hunter Valley is home, or was once, to some of the most picturesque landscapes in the country, in a fertile valley that made the region famous for fine wines and fast thoroughbreds.

Both are now adversely affected by the creeping scourge of open cut coal mines, some of them eight kilometers long and several hundred meters deep.

Also affected is the local community, whose health outcomes lag behind the state average, with children in the region more vulnerable to respiratory disease, adults more vulnerable to cardiorespiratory illness and many experiencing the mental and emotional health impacts associated with loss of the landscape, of farms and towns and villages as they are swallowed up by mines, the loss of friends, community, lifestyle, opportunities, and the attendant socio-economic impacts.

The health costs associated with coal in the Hunter Valley has an adverse economic impact on the local economy (with $65 million pa in health harms in just two towns, Muswellbrook and Singleton, close to several mines, and through which the coal trains which stretch for kilometers pass; on the regional economy with a health cost of $200 million pa from the Valley's five coal fired stations; and on the global economy of $16-$66 billion pa from the social costs of carbon i.e.global damages from current coal production).

The response of the government has been to insist that coal has a bright future, with members of the NSW Parliament holding what they called a Carnival of Coal in Parliament House one day in August this year (we eagerly anticipate a day in which they celebrate low carbon healthcare, or similar worthy initiatives!) while NSW Health bureaucrats have complained that our report has led to people contacting the department with concerns about their health.

Heaven forbid that they respond with regulation to limit that harm! The coal lobby industry said, and I quote: "There's absolutely no evidence to support the claims made in this report." Well, unfortunately there is a substantial weight of evidence and none of it in the coal industry's favour.

Just this week it has emerged that the industry and the state government in the Australian state of Qld are both implicated in covering up an emerging trend of increasing incidence of pneumoconiosis, or black lung disease, among coal miners in that state, echoing an international trend of increasing rates of the disease among young miners (ie around 40 years old) in the US.

So there are governance issues to wrestle with, when democratically elected governments and their administrators are more influenced by industries peddling let's face it, profoundly dangerous products, than by health experts armed with scientific evidence.

There isn't time to go into this now, but our efforts over the next few years are going to be more focused on mobilising health professionals are part of a wider social movement to demand accountability from our politicians and less about documenting and presenting the evidence for action, which we believe to be comprehensively addressed.

To turn to financing for a moment, some of the more effective methods of shifting the financing of fossil fuels have been the divestment campaigns that are underway around the world encouraging (through public pressure and shaming, really), universities, churches, institutions, and government to stop investing in fossil fuels.

I want to finish by talking briefly about policy, since this is a governance tool, and one through which we can effect change, if we can get governments to cooperate.

We need this to happen at both a national, and local jurisdictional level, as well as internationally and the more we understand about what is happening, the more we can leverage the successes and work to close the gaps.

Along with several of my colleagues in the audience, I have been involved in a global survey of national climate change and health policies “ figuring out what countries are doing to specifically respond to the risks posed to the health of their citizens by climate change.

We had 35 respondent countries, and the survey revealed that most of them do not have comprehensive plans to protect health from climate change, most have done little or no work in evaluating health risks, and few were engaging the health sector in creating a climate resilient healthcare system or investing in research to understand vulnerable populations and infrastructure.

This report from the World Federation of Public Health Associations recommends all countries develop a strategy to respond in the form of a national climate change and health plan.

So I encourage you to look at this report, if your country is not represented, then complete the survey it contains to identify opportunities and gaps in your country and use it to advocate for a healthy response to climate change in your country, which includes the preparedness of the health sector, both mitigation and adaptation actions, and the engagement of health professionals in policy development.

Additional to this work is a huge effort of advocacy for action at the local and regional level, as well as internationally, and this includes the recommendations for policy and action from health groups that are part of the Global Climate and Health Alliance (GCHA), of which our organisation is part.

A new briefing paper, called Health and Climate in 2015 and Beyond, is available on the GCHA website and it calls for, among other things for:

So there is an important role for health professionals and health organisations, that is all of you, to intervene in this effort “ to advocate for the energy transition, to participate in the effort to shift the finances away from fossil fuels, and to be part of demanding accountability from your elected representatives to respond to this as an urgent health issue, for which there is a comprehensive evidence base, and to make sure there are political and electoral consequences that the health community is helping to lead, if they fail to respond."